News | 5 hashtags about the Dolomites heritage: the second edition of the #dolomitesmuseum campaign is on its way 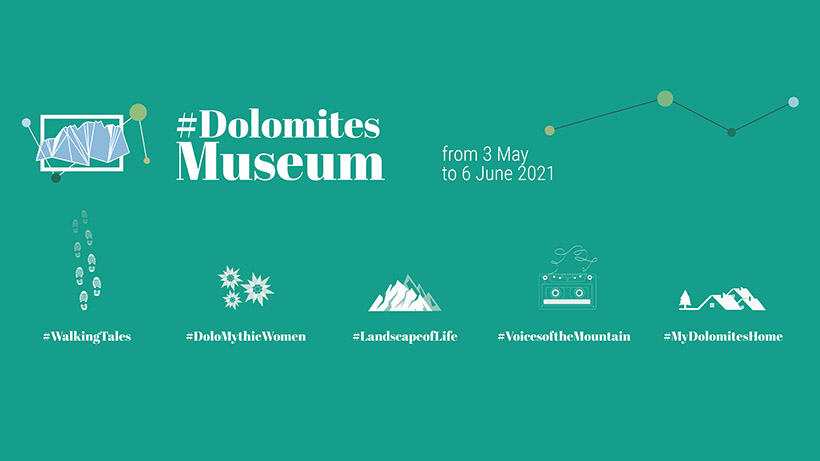 The new edition of the thematic campaign led by the Museums of the Dolomites is beginning.

are the five themes chosen by the museum operators in the UNESCO Dolomites Foundation’s network project. More than 1,000 stories have been collected in the participatory ‘Story Workshop’ archive on the DOLOM.IT platform since 2019.  And now, the collective story will continue during the new campaign from 3 May to 6 June. Following the example of the Museums on social networks, all mountain enthusiasts will be able to publish their memories, testimonies and interpretations of the Dolomites heritage.

The Museums of the Dolomites are preparing to lead the second edition of the #DolomitesMuseum campaign: a multitude of voices from museums and cultural institutions, operators and enthusiasts will come together to tell of the richness of the UNESCO Dolomites heritage. Every week, more than 30 museums in the Dolomites will share content from their collections, building a truly participatory story around the individual hashtags in which people online are invited to take part, adding their own memories, reflections and testimonies.

It all starts on 3 May with #WalkingTales (3 – 9 May), to celebrate hiking in the mountains and the variety of paths and experiences that are experienced by walking; the event will continue the following week (10 – 16 May) with #DoloMythicWomen to reflect on the key, heterogeneous role of women in the mountains; the third week (17 – 23 May) will be dedicated to the changing landscape with #LandscapeofLife by observing the geological changes as well as those made by man to adapt to living in the area. We will continue with #VoicesoftheMountain (24 – 30 May) and an invitation to listen, record and share the many sounds that make up our experience of the Dolomites. The campaign will end during the first week of June (31 May – 6 June) with #MyDolomitesHome which will collect the stories of emigrants, residents and new inhabitants who choose to live in and inhabit the mountains. At the end of the campaign, the online story will flow into #MuseumWeek, the International Museum Week.

The five themes were chosen by the operators of the museums participating in the “Museums of the Dolomites” project launched in 2019 by the UNESCO Dolomites Foundation and coordinated by the DOLOM.IT virtual museum.  The project has seen more than 30 museums and institutions come together online around digital initiatives that have led to the creation of the Story Workshop, a dynamic archive of more than 1,000 stories and memories powered by cultural operators and enthusiasts. This is a unique opportunity for residents, visitors and lovers of the Dolomites to experience the richness of the Dolomites’ heritage and contribute, in turn, to enriching it with their own testimonies from the comfort of their homes.

“The #DolomitesMuseum campaign is a great opportunity to express all the richness of the world heritage kept in our museums. This ‘working together’ on the net creates great cultural and added touristic value while, at the same time, strengthening the participation of local communities in talking about and caring for our mountains”, says UNESCO Dolomites Foundation President Mario Tonina. “The Museums of the Dolomites project has allowed us to discover how many similarities there are among our collections and how each can complete the story of the other”, continues Cristina Busatta, Director of the Ethnographic Museum of the Province of Belluno. “Museums must be not only treasure chests for preserving the past, but also laboratories for the regeneration of new heritage; the added value of the project lies precisely in the new interpretations that arise from all those who join this story from time to time”, concludes Riccardo Tomasoni (MUSE of Trento) and Gianluca D’Incà Levis (Contemporary Dolomites).

More than 40 museums, cultural institutions and visitor centres have embraced the project during these two years. Among them are the aforementioned Ethnographic Museum of the Province of Belluno, MUSE and the Geological Museum of Predazzo, the Contemporary Dolomites Museum and many others such as (but not limited to) the Museum Ladin Ciastel de Tor, the Natural Parks Office of Bolzano, Carnia Museums, the Lis Aganis Ecomuseum, the Museum of Uses and Customs of the Trentino People of San Michele all’Adige, the Marmolada Grande Guerra Museum of the Great War, the Eyewear Museum of Pieve di Cadore, the G. Angelini Foundation, the Bellunesi in the World Association, the Dolomites Project, the Rules of Ampezzo Museums, the Ladin de Fassa Museum, the Albino Luciani Museum (MUSAL), the Belluno Feltre Diocesan Museum, the Angiul Sai House Museum, the Dal Lago di Valdagno Civic Museum.

The voices and testimonials of people contributing through their social profiles will be added to these. “Participating in the campaign is simple; just publish your stories week by week using the campaign hashtags along with the #DolomitesMuseum hashtag”, explain Stefania Zardini Lacedelli and Giacomo Pompanin, coordinators of the Museums of the Dolomites project. “These testimonials will be collected and will compose the new interactive galleries of the Story Workshop“. To follow the collective narrative, just type the hashtag #DolomitesMuseum or follow the social profiles of the DOLOM.IT Museum and the UNESCO Dolomites Foundation, which will collect all the contributions.

For further information: the five hashtags

The mountain is a place of trails and of stories. Each time we walk the same path, the experience is different, coloured by the words or silences of our companions, by the stories of those who have passed by before or by the timeless legends that are set there. From 3 to 6 May, you can share your favourite trails with us at #WalkingTales; tell us about your nature hikes, your walks through areas haunted by the vestiges of war, religious pilgrimages and places of lost or rediscovered trades and crafts. Tell us which ones are important to you and why.

Shepherds, refugees, scientists, photographers, farmers and holders of ancient and modern knowledge; entrepreneurs, writers and, at the same time, protagonists of legends and tales… Women’s roles in the Dolomites have always been essential and varied – from supporting the family to discovering the summits, guided by a curiosity that seeks new answers for the present as well as the future. Revealing this is the role of #DoloMythicWomen, the hashtag at which we invite you to share from 10 to 17 May, along with stories of the independence, courage, strength, kindness and sensitivity of high altitude women. Yesterday and today.

The Dolomites are a living entity in constant change; they were once atolls surrounded by a tropical sea, the traces of which are still visible in the rocky walls. Only later did the mountains form, and much later, the first human settlements. Since then, man has continued to modify the landscape around him in order to survive by benefiting from its resources. Fossils, plants, forestry, collective land management, agricultural crops and food production: from 17 to 23 May with #LandscapeofLife, tell us how the Dolomites are, for you, a landscape of life.

How many voices do the Dolomites have? This week, we invite you to stop and listen; the richness of sound in these mountains is incredible. The voices of the Dolomites are the sounds of the forest, the sounds of animals, the rustle of leaves and the languages spoken in the area with their echoes of stories, inflections and idioms that vary from valley to valley. From 24 to 30 May, you can record your audio and share all the voices of your Dolomites on social networks at #voicesofthemountain!

The Dolomites are a place for new arrivals and those who return time and again; they can welcome both old and new inhabitants. Now as in the past. We start with the stories of people who left the Dolomites to emigrate elsewhere, and then we come to those of people who have decided to stay or return; to live here, sometimes in a new and original way: from the recovery of ancient crafts to the recent phenomena of digital nomadism. From May 31 to June 6, tell us how the Dolomites are, or have become, your home at #MyDolomitesHome!