Materials | How to manage Dolomite grasslands. Meetings and proposals 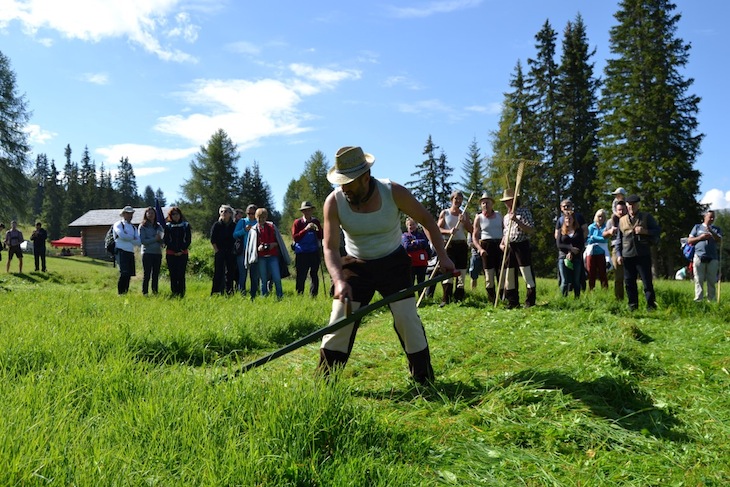 The opening edition of #SFALCI, part of the Dolomites UNESCO LabFest event celebrating haymaking, held in La Val, in Alta Badia, from 5 to 7 September, provided the valuable opportunity for informed participation in meetings to discuss the management of the Dolomite grasslands and meadows.

This highly interactive forum allowed experts and local operators in the various parts of the Dolomites UNESCO World Heritage Site to engage in dialogue, resulting in a document, entitled the Instant BOOK, explaining the values to be adhered to in managing the grasslands. Recognised by the various institutions, this document enables policy-makers to optimise their efforts in this area.

A whole day was taken up with a meeting attended by people from different locations and different walks of life, including farmers, hoteliers, members of the Foundation’s Scientific Committee, academics and civil servants and administrators from the five provincial authorities with responsibility for the UNESCO World Heritage Site.

The meeting followed the World Café formula in which participants were able to brain-storm and discuss three issues of vital importance for the conservation of the Dolomite landscape, one of the two reasons for UNESCO declaring the Dolomites a World Heritage Site. The discussion focused on how to enhance the role of the Dolomite grasslands in terms of agriculture, tourism and biodiversity. A round table discussion lasting several hours was set up for each of these issues, covering local experience, best practice, difficulties and factors involving conflicts of interest.

At the end of the discussion, an Instant Book was produced collecting together the main issues debated at the meeting and the conclusions reached by the participants.

As is the case for many other aspects of the Dolomites territory, there is little consistency in the way in which the grasslands are managed in the five provinces, each working to its own rulebook and exercising its own powers. In Alto Adige, for example, local farmers have always had a leading role, including in politics, with the maso chiuso system of heredity intended to prevent land holdings being broken up. In the Friuli Dolomites, on the other hand, as in part of the Province of Belluno, depopulation has inevitably led to abandonment of the land and the practice of haymaking that, until the 1960s, was a seasonal Alpine activity fully integrated with the local economy. Industrialisation has also had a hand in transforming the landscape of some areas in the Dolomites.

Today the woodland has encroached almost to the boundaries of the built-up areas, and while tourists may view this as a sign of an authentic, natural environment, it is well known that failure to take care of the grasslands and meadows has some significant consequences, not only for the landscape but also for conserving biodiversity.

The question is how to preserve the Dolomite landscape while reconciling the, at times conflicting, interests of biodiversity, agriculture and tourism. It is possible to integrate these areas of interest, but first the politics of the situation must be addressed to stress the importance of protecting the landscape and its meadows. Farmers take a leading role in achieving this since preserving the meadows is only sustainable if there is some economic gain. In this light, livestock farming also becomes essential for disposing of the haymaking product.

There is no shortage of ideas, all three working groups have put their finger on depopulation as a key factor, clearly making it necessary to involve the world of politics in providing economic support for the farmers of the high pastures.

Cover photograph by Michele Giacomel. Haymaking contest in the Armentara meadows during the Dolomites UNESCO LabFest 2014
Photograph of the meeting by Francesco Iuretig