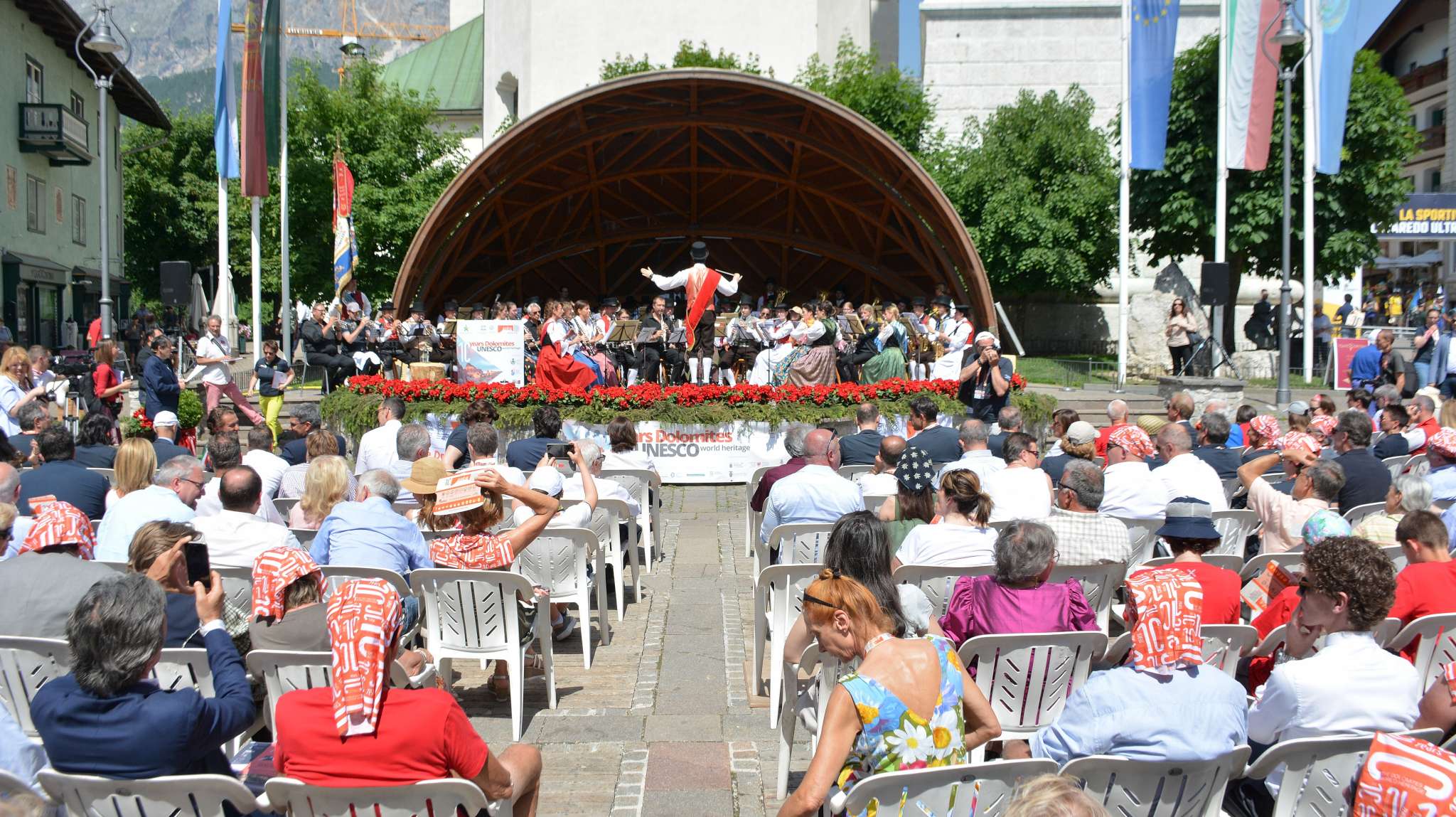 A day of words, music and flavours, with concerts, meetings and a lunch service by award-winning chefs; as well as a presentation of our new projects, including the one to rebuild the Serrai di Sottoguda gorge after Storm Vaia.

On June 26, the first 10 years of the UNESCO Dolomites were celebrated in Cortina d’Ampezzo with a wonderful day out. The town centre was turned into a stage from which to proclaim a great chorus of good wishes for our World Heritage mountains, a precious asset for everyone. The inclusion of these mountains on the UNESCO list marked both the birth and the revival of an idea: that of the Dolomites as a World Heritage that needs to be protected and promoted as a unique whole. This milestone was a very important form of international recognition, but it was also a starting point for designing future plans and pathways for development, all under the banner of sustainability.

All in a shell

The celebrations in Cortina d’Ampezzo started at 11 a.m. The town centre with the Piazza Dibona and its spectacular Conchiglia acted as the headquarters for these celebrations, and for the presentation of over 140 other events taking place during the summer in Veneto, Trentino, South Tyrol and Friuli Venezia Giulia.

The day started with contributions from the representatives of the various institutions starting with the Ministry of the Environment, which set up a Committee chaired by Undersecretary Gava to celebrate the tenth anniversary of the UNESCO World Heritage Dolomites.

And then there was music: there were four bands performing, spaced out between the various official contributions. The groups were from different areas within the World Heritage site, and played together in the spirit of cooperation that forms the basis of UNESCO identity.

Dolomites Today, we are all protagonists

To make this day unique, the Dolomites Today initiative was also conceived, i.e. the creation of a collective story thanks to everyone’s participation: on 26 June, everyone could show their Dolomite connection in a video and share it. The initiative was made possible thanks to the collaboration with the Digital Storytelling Lab of the University of Udine, which, in the weeks leading up to 26 June, also edited a number of video clips to explain the message of the project and at the same time give some pointers for quality filming.

Ten years ago, UNESCO declared our mountains a World Heritage Site. The news came from Seville, on June 26th, 2009. Since then, a new pathway has opened for our Pale Mountains, and in 2019 we celebrated this on a wide scale, starting with the party in Cortina d’Ampezzo and continuing through the summer with a lineup of over 140 events. The various initiatives were coordinated by the UNESCO Dolomites Foundation and the Ministry of the Environment, through its special Committee for the UNESCO Dolomites tenth anniversary celebrations.

“Their dramatic vertical and pale coloured peaks in a variety of distinctive sculptural forms is extraordinary in a global context. This property also contains an internationally important combination of earth science values“

On 26 June 2009 UNESCO listed the Dolomites as a World Heritage Site for the aesthetic value of its landscape and for the scientific importance of its geology and geomorphology.

The Dolomites are not an interrupted mountain chain but rather nine mountainous systems each separated by valleys, rivers and other mountains. The 142,000 hectares that make up the UNESCO World Heritage Site form a sort of archipelago spread over a vast Alpine area and falling within the boundaries of five Italian provinces of considerable institutional and administrative diversity.