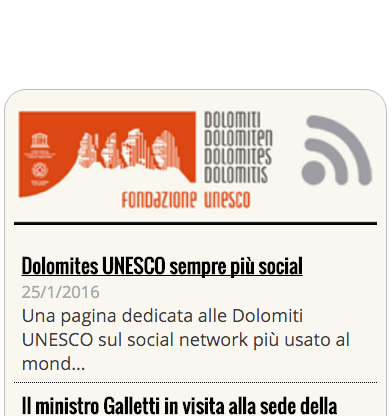 From January 2016, all those who subscribe to the project will be able to display the UNESCO Dolomites news feed, a banner posted on the home page of their own website. The banner, shown here and instantly recognisable thanks to the logo of the UNESCO Dolomites Foundation, lists the main news about the UNESCO Dolomites Site, directly linked to www.dolomitiunesco.info. Once the banner has been installed, it automatically updates every time new content is posted on the Foundation’s website. To date, a group of refuge owners have subscribed and they will soon be joined by the municipalities of Cavalese, Rocca Pietore and San Candido/Innichen, the first municipal authorities to include the UNESCO Dolomites news feed on their websites. The main objective of this latest venture is to make people aware of what is being done in the territory to communicate and enhance our Heritage, a need which emerged during the eleven local participatory meetings. The people who took part in #Dolomites2040 suggested creating an information point in the municipalities of the UNESCO area to inform local residents of the importance of inscription and the activities organised around it. In agreement with the Scientific Committee of the Foundation, the proposal was accepted and it was decided to broaden it to include everyone involved in implementing UNESCO inscription. The first stage is to involve refuge owners, followed by the municipalities, the park authorities and the Foundation’s Supporters. Don’t hesitate to contact us for information.