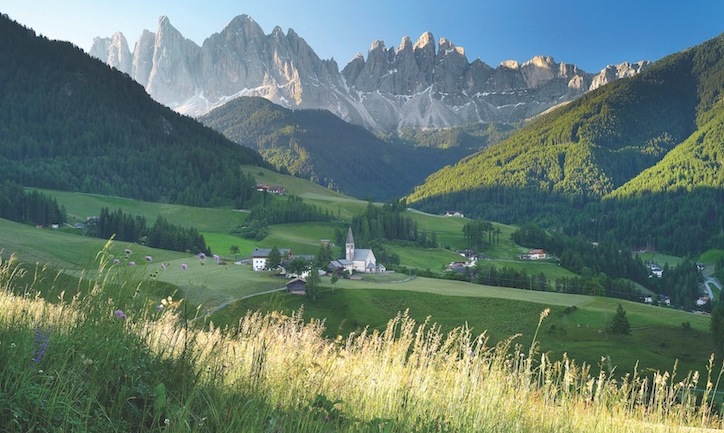 In March 2014 Touring Editore published an edition of their Guida Verde d’Italia (Green Guide to Italy) dedicated to the Dolomites. The guide was compiled in partnership with the UNESCO Dolomites Foundation. Working with this high-profile publisher, the publishing branch of the Touring Club of Italy, offered the foundation a golden opportunity to raise awareness of this UNESCO World Heritage Site.

The Guida Verde delle Dolomiti treats the Pale Mountains, as the Dolomites are known locally, as a single territory, just as UNESCO sees it.

The Dolomites World Heritage Site is a serial property, consisting of nine mountainous systems spread over five territories governed by different local authorities. The Touring Club guide presents each system as a geographic area for visitors to explore, giving them a wealth of information about the local culture, history, food and drink, pointing out towns of particular interest, unmissable outings and trips, the best vantage points for spectacular views over these breath-taking mountain landscapes, with their vertiginous crags, sheer drops, gently rolling pastureland and rocky screes.

The guide prepares travellers for their visit with useful information and a section dedicated to the history of the Pale Mountains. The history of the Dolomites is indeed a complex tale, fashioned by its geology and landscape, with scientific interest in these mountains making its mark as has its opening up to tourism. First and foremost however, it is the history of its people, populations from different rootstock and with diverse cultures who are nonetheless united by a common identity and sense of belonging.

For each system the Guida Verde delle Dolomiti recommends hiking trails and outings that just can’t be missed, all the while promoting responsible, sustainable tourism, showing the utmost respect for the Dolomites UNESCO World Heritage listing.