Activities | The first viewing platforms in the UNESCO Dolomites 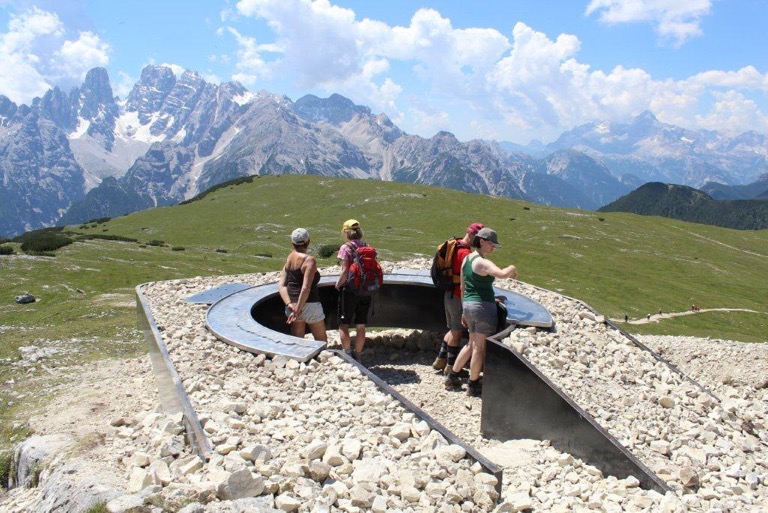 In line with its mission to promote awareness and enhancement of the UNESCO World Heritage Site, the UNESCO Dolomites Foundation commissioned Dolomiti Project to carry out a preliminary study to identify strategic locations for information points in hot spots all over the Dolomites.

The study entitled Implementazione delle linee prioritarie della programmazione strategica generale di gestione del sito Dolomiti – Dolomiten – Dolomites – Dolomitis UNESCO aimed at establishing the priorities for the general management strategy of the Dolomites UNESCO World Heritage Site, and which can be found here, was completed in 2014, and among the various hot spots identified were 31 locations providing excellent viewing platforms, evenly distributed over the nine systems making up the property.

On 27 August the Autonomous Province of Bolzano inaugurated the first of these viewing platforms, at an altitude of 2307 metres above sea level in the Parco Fanes-Senes-Braies natural parkland. The view from this, the first natural balcony over the Dolomites, is truly spectacular, taking in the peaks of Sesto and Braies, Cadini and Cristallo. This viewing platform on Monte Specie is the pilot project that will lead the way to more of the same.

Meanwhile the Province of Belluno has also been working on the design of three viewing platforms on its territory identified by the Dolomiti Project study. The chosen areas are Monte Rite in Cibiana di Cadore, Monte Agudo in Auronzo di Cadore and Faverghera on Nevegal in Belluno.