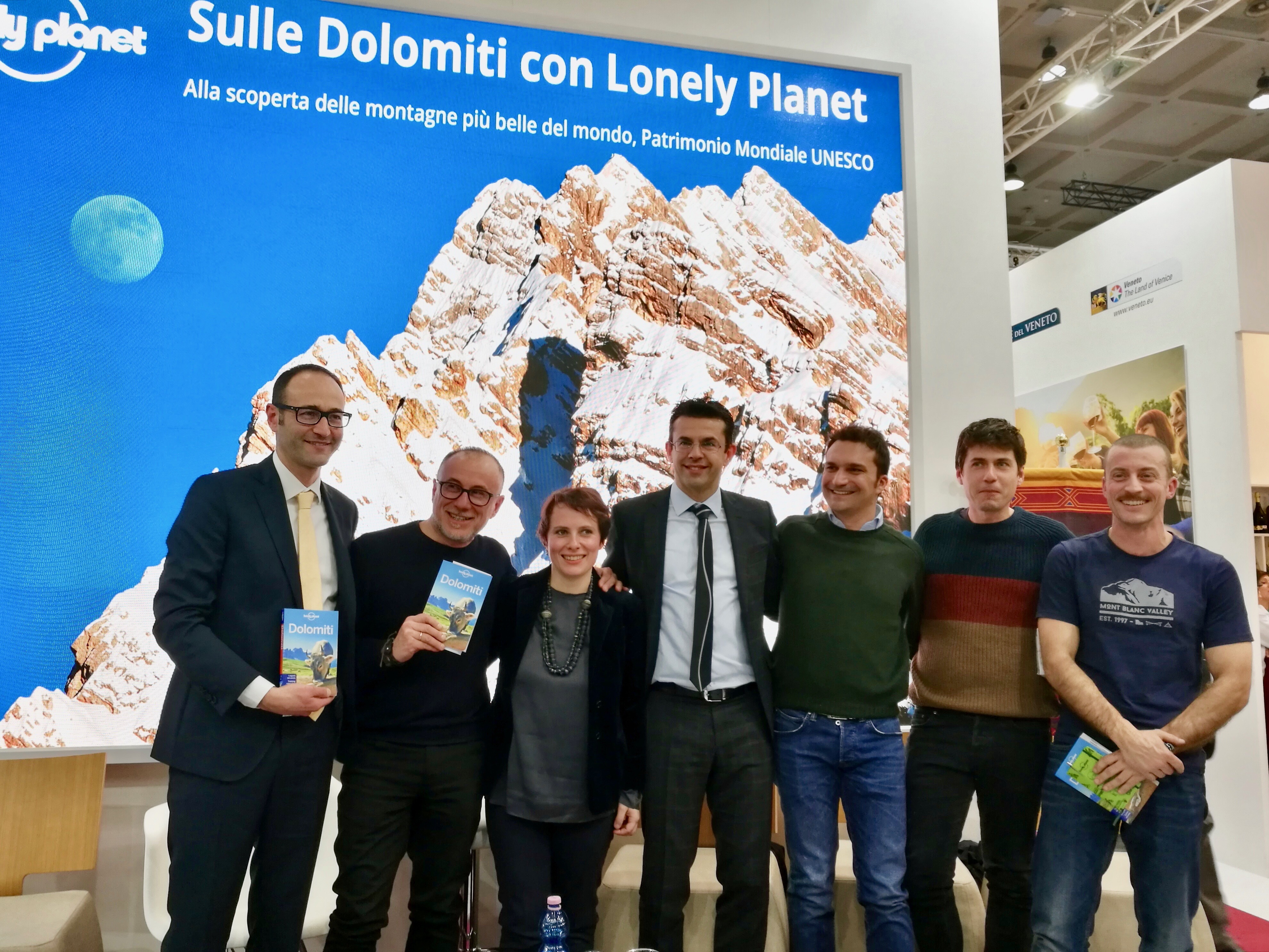 “A destination with no boundaries for tourists who are not interested in boundaries”. This is how Federico Caner, councillor for tourism in the Veneto Region, opened the launch of the Lonely Planet Guide to the Dolomites on Sunday 11 February on the Veneto stand at BIT – the International Travel Exhibition – held in Milan. The guide, written by Giacomo Bassi, Denis Falconieri and Piero Pasini and published by EDT, is not divided according to the administrative boundaries of the provinces and regions, it is organised into the nine Systems recognised by UNESCO in 2009 as a World Heritage Site. The councillor also took the opportunity to invite Lonely Planet Italia, represented at the launch by director Angelo Pittro, to have the guide translated as soon as possible.

“Our product is tailored to our public: travellers themselves often set out without actually considering, and often without knowing, the administrative boundaries” confirmed Pittro.

The director of the UNESCO Dolomites Foundation, Marcella Morandini, thanked the Veneto Region for hosting the press conference for the launch of the Lonely Planet guide. “No one should be without this guide when organising a trip to the extraordinary fossil archipelago of the Dolomites” said Marcella Morandini, “now visitors have all the information they need to explore the area and take a journey back in time, giving them an even greater appreciation of the importance of this vast heritage”.

The chairman of the Province of Belluno, Roberto Padrin, was also at the Milan exhibition and he pointed out how the Belluno area, where most of the UNESCO Property is located, often receives limited media attention and how an interregional guide of this kind is the ideal way of bringing together the different territories to promote the area as a whole. “The Venice-Dolomites connection is also another great asset for tourism and that must be the focus of our attention in the future”, added Padrin.

Then it was over to the three authors, journalists Giacomo Bassi, Denis Falconieri and Piero Pasini. Giacomo Bassi, a Sardinian and a seasoned traveller, has already contributed to part of the Lonely Planet guides to Milan and Lombardy, as well as the pocket versions of the Marche and Florence. Here he wrote mainly about the Dolomiti Settentrionali, the Pale di San Martino, the Pale di San Lucano, the Dolomiti Bellunesi, the Vette Feltrine and the Pelmo and Croda da Lago system. Denis Falconieri is from Valle d’Aosta, so got the chance to explore the Dolomite part of the Alps, crossing the Bletterbach gorge and visiting Sciliar, Catinaccio, Latemar, Puez-Odle and the Marmolada. Pietro Pasini is from Venice and has already contributed to the Lonely Planet guides of Umbria, Belgrade and Serbia. He wrote about the Dolomiti di Brenta and the Dolomiti Friulane and d’Oltrepiave. All three authors covered thousands of kilometres in their cars and walked hundreds of kilometres to report on the many natural and manmade aspects of the Dolomites, starting from the nine Systems and then looking further afield to the surrounding area, including the valley floors and the large and smaller towns. The guide contains everything from food to art, history and local traditions, giving practical advice and tips to tourists planning to visit this vast area. It was not only the incredible sheer landscapes which amazed the three authors, but also the hidden artistic treasures of each of the villages they visited and the warm welcome they received whatever the altitude.