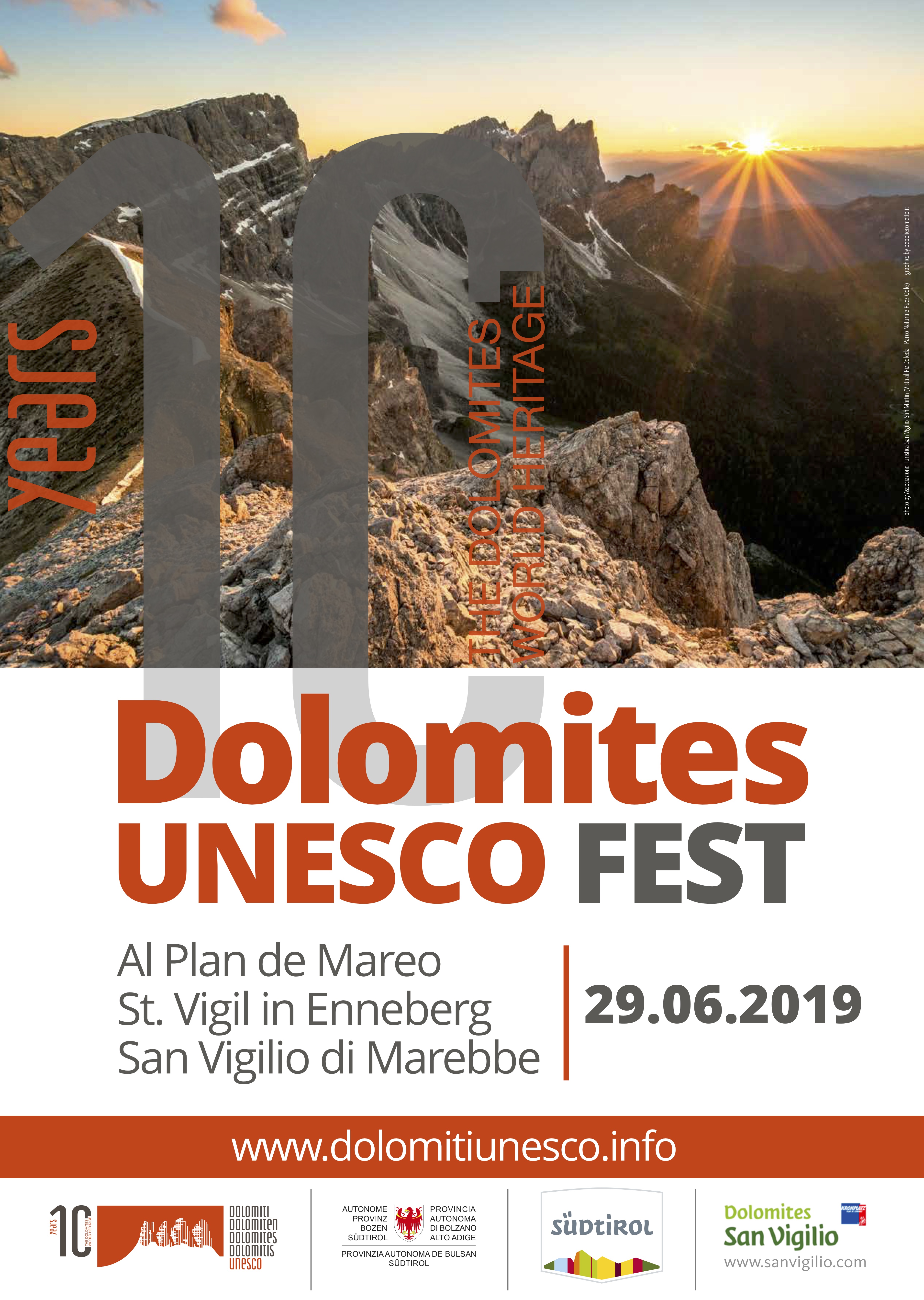 Following the wonderful celebrations in Cortina on 26 June 2018, this year’s “Dolomites UNESCO Fest” will take place at San Vigilio di Marebbe on 29 June. The party will be preceded by a short introduction, when residents and visitors will have a chance to learn more about our World Heritage.

A festival of sounds, colours and flavours

The “Dolomites UNESCO Fest” is a time when the people of the Dolomite valleys meet to share their music, traditions and gastronomy, as well as learning more about our World Heritage site.

Events will start on 29 June with the celebration of a Mass in the music pavilion of the centre of San Vigilio and official speeches by the authorities. This will be followed by music from various bands, tastings of local gastronomy, flag-waving displays and the recounting of Fanes legends to take us into the evening. There will be a particular focus on children and the need to spread World Heritage values, so many institutions will be setting up stalls along the pathway from the pavilion to the Visitor Centre of the Fanes-Senes-Braies Natural Park. These will include: The Provincial Natural Parks Office, the UNESCO Dolomites Foundation, the Provincial Geological Office, MUSE of Trento, the Predazzo Geological Museum, the Bolzano Science Museum, the Brunico Forest Inspectorate/San Vigilio Forest Station, the “Micura de Rü” Ladin Institute, the “Ciastel de Tor” Ladin Museum, AVS and CAI, the “Geology & Tourism” Association, and the Università Popolare delle Alpi Dolomitiche (People’s University of the Dolomite Alps).

There will also be various producers from the five Dolomite provinces, who have chosen to join the UNESCO Dolomites Producers Network.

The programme is being coordinated by the San Vigilio/San Martin Tourist Association, and will also include (on 27 and 28 June) a varied and in-depth discussion of the following theme: “The heritage for future generations: the environment, nature and starry skies.”

The organisers have announced that it will cover the themes of environmental protection, the fight against different forms of pollution, climatic changes in the Alps, and the millennial presence of man and his impact on the ecosystem of the Dolomites. It will also address the subject of beauty and harmony, from both the psychological and aesthetic points of view.

June 28 will be a truly stellar evening. Some people may not know that the Andrušivka astronomical observatory in Ukraine discovered an asteroid in 2008 and gave it the name “UNESCO“, to honour one of the most highly valued international institutions for its promotion of education, science, culture, and collaboration between nations. Guests at the evening’s festivities will be able to travel to the asteroid via a video link, watching the photometric signal from the Tivoli Farm Observatory in Namibia, specially activated to provide a symbolic start to the celebrations.