News | #DOLOMITES2040, reflections and ideas from the people who live in the Dolomites 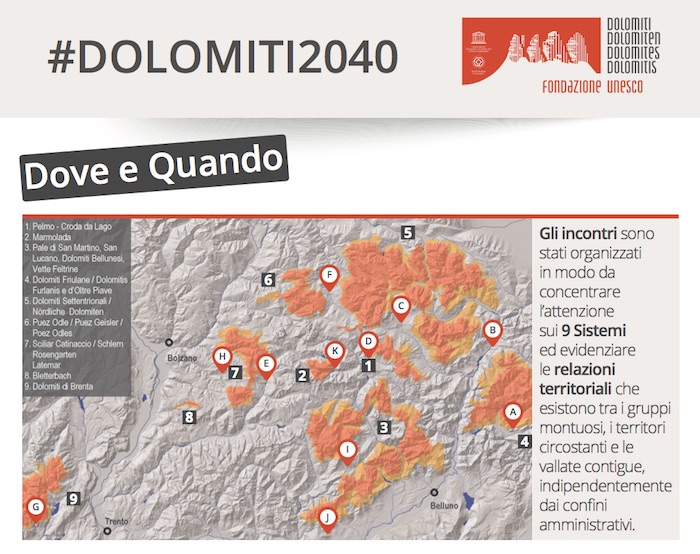 During May and June the Foundation met hundreds of people at the 11 participatory meetings dubbed #DOLOMITES2040.

The main task of the UNESCO Dolomites Foundation for the coming two years is to draw up the Overall Management Strategy for the Dolomites UNESCO World Heritage Site and the Sustainable Tourism Strategy. These strategies will be based on a series of studies and investigations the Foundation has undertaken in the last few years looking into, among other things, sustainable tourism, the integrated management of the Dolomite landscape and mobility.

In addition to these studies analysing the real situation in the Dolomites, regardless of provincial and regional administrative borders, in May and June 2015 the Foundation reached out to all those people living their daily lives in the Dolomites, collecting their ideas and suggestions for the Dolomites of tomorrow. Over the course of these 11 meetings, the Foundation listened to the ideas and reflections of some 500 people, living all over the Dolomites UNESCO World Heritage Site. The documented results of these meetings will form a priceless resource for drawing up the Overall Management and Sustainable Tourism Strategies.

All the inhabitants of the Dolomites were invited to participate, with a particular emphasis on stakeholders in the territory, such as administrators, environmental associations, tourism industry operators, refuge owners and farmers.

At each meeting the participants, guided by a moderator, contributed to discussions on the four themes of sustainable tourism, socio-economic development, relationship-building and active conservation. The participatory process was managed using the World Café technique involving four themed round-table discussions, each one aimed at putting forward definite proposals, assisted by the moderators.

The opinion from the four corners of the Dolomites revealed some differing and some common factors, problems and aspirations. The conversations covered the role of natural parklands and the balance between conservation and socio-economic development, education and the mountain culture, the need to create an ongoing dialogue between various parts of the UNESCO World Heritage Site, balancing out the seasonal nature of tourism and managing flows, issues surrounding farming at altitude and trying out new forms of shared management for the Dolomites.

The participatory process #DOLOMITES2040 prompted the inhabitants of the Dolomites to get together to think about the challenges facing their mountains in the coming years and how they would like life to be in the Dolomites of 2040.

The final meeting was held on 19 June in Marmolada. Now the Foundation is busy cataloguing and analysing the proposals put forward. A report will then be produced due for public presentation on the morning of Saturday 29 August in Auronzo, as part of the Dolomites UNESCO LabFest. A copy of the report will also be sent to all those who took part in the participatory process #DOLOMITES2040 and it will be delivered to UNESCO together with the Overall Management Strategy and Sustainable Tourism Strategy.