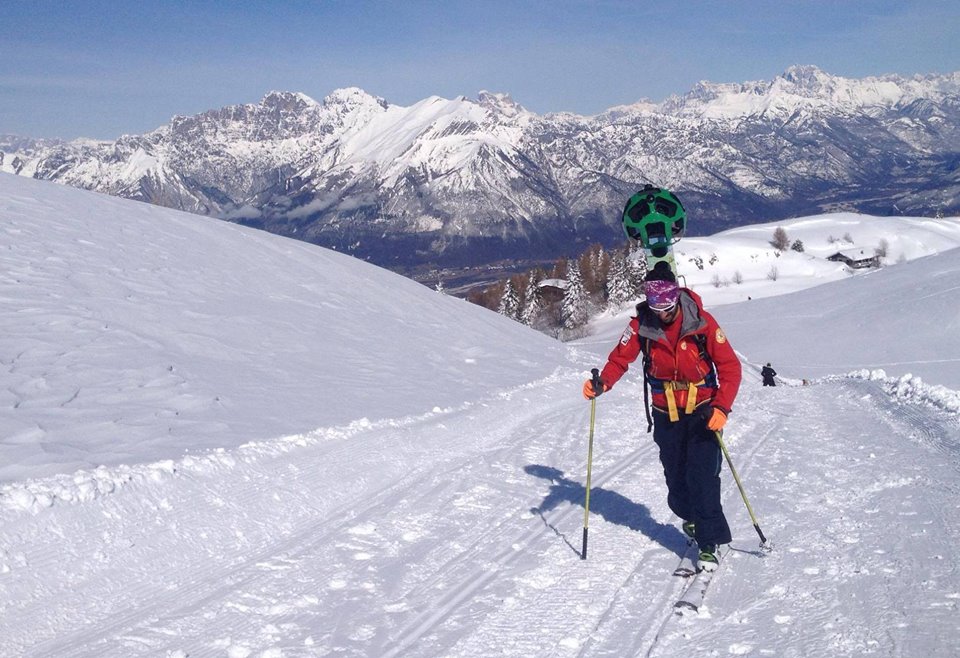 The UNESCO Dolomites Foundation is the first Italian organisation to sign up to the Google Trekker Loan Program, so from today it will be possible to enjoy the Dolomites online, anywhere from New York to Calcutta, on Google Maps Street View.

The result of the combined effort put in by volunteer mapping team from the Dolomites regional mountaineering clubs, the UNESCO Dolomites park authorities, the Alpine guides and the mountain rescue volunteers, using all their skills and knowledge and working alongside the Foundation’s partners, is over 40 mapped trails of extraordinary beauty, some of which can be accessed from the links at the bottom of the page.

The project to map some of the footpaths in the systems that make up the Dolomites UNESCO World Heritage Site was launched at the end of summer 2014.

The mappers travelled along the footpaths with a Google Trekker backpack containing 25 kilos of equipment in a metal framework with an aerial and 15 cameras shooting thousands of stunning views at the rate of eight every ten seconds.

As Marcella Morandini, Director of the UNESCO Dolomites Foundation emphasises “It goes without saying that this is a great communications and promotional tool and while it can’t replace a carefully planned hiking route, it’s an innovative way of promoting the UNESCO World Heritage Site the world over”.

During the test phase, the mapping team travelled along some twenty footpaths, including the trails to the Dal Piaz Refuge on the Vette Feltrine peaks, the Mondeval plateau from the Giau pass, Prato Piazza, the Armentara meadows and the Tosa Pedrotti refuge on the Brenta Dolomites. This was followed by a second phase along the scenic circular paths and the high altitude trails known as the Alte Vie. We are now busy with the third phase which will produce fourteen more routes, this time mapped during the winter season. Once again the routes will include most of the nine Dolomite systems making up the site.

From the Duran pass to the Caresiato Refuge, another footpath mapped in system 3 runs from the Rolle pass, leading down to the Val Venegia. We will then head east to Friuli in the pristine environment of the circular Anello dei Forni trail. The northern Dolomites feature the famous Oten and Fiscalina valleys, the pasturelands of Malga Ra Stua and the nearby area surrounding the Cinque Torri. Thanks to Google, we can plunge right down inside the monumental Bletterbach gorge, concluding our epic journey on the peaks of the Brenta Dolomites.