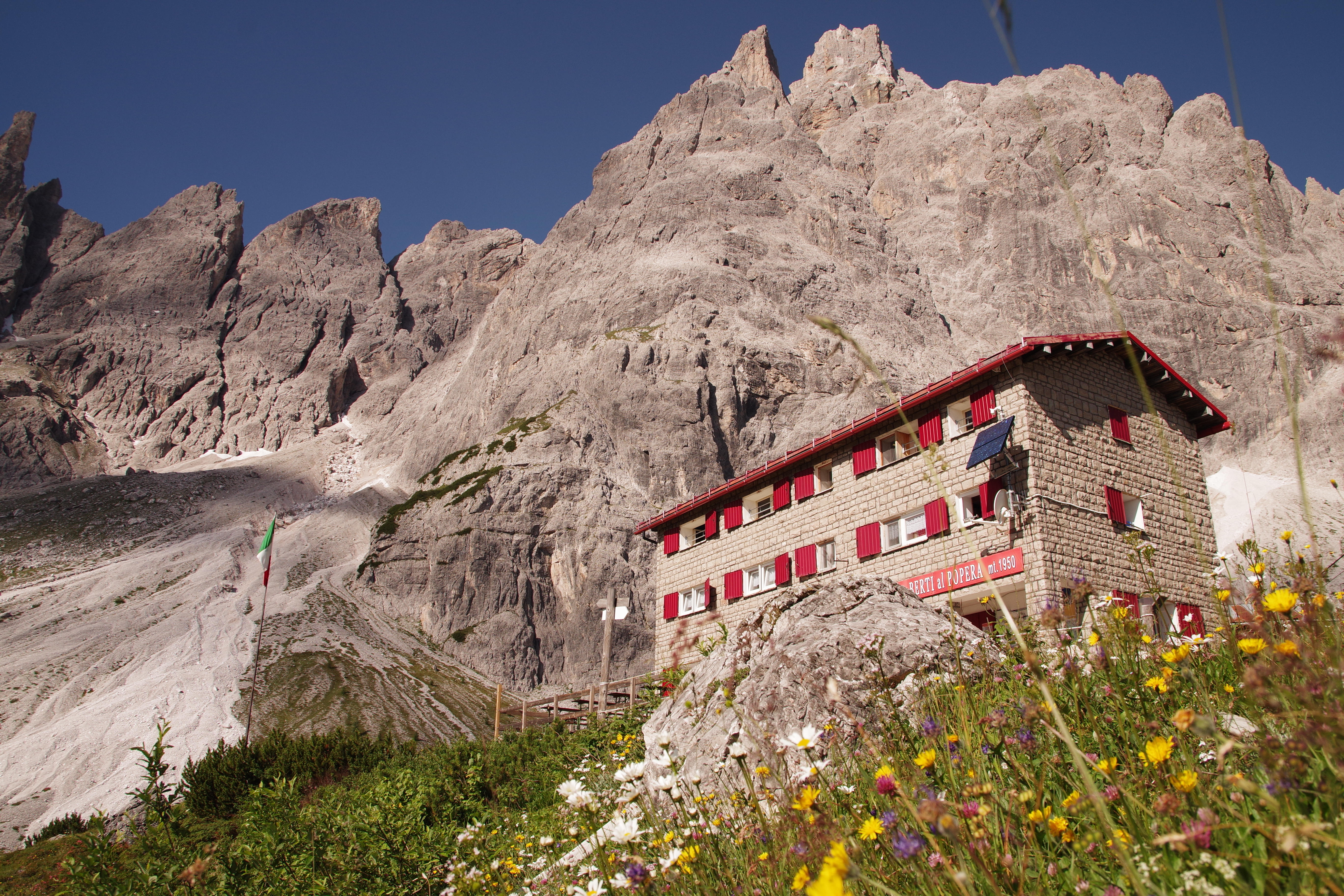 To learn about the first two of these Other High Altitude Encounters organised by the UNESCO Dolomites Foundation in partnership with the managers of the mountain huts, you just need to see the smiles on the faces of Mirco and Erika, managers of the Dal Piaz mountain hut, the talented hands of chef Alessandro Gilmozzi, supporter of the UNESCO Dolomites Foundation, transforming simple wild herbs into explosions of flavour, the enthusiasm of the volunteers from the Mestre CAI (Italian Alpine Club) who, ever since 1970, have been taking turns to keep the Galassi mountain hut open and self-managing, the wonder on the faces of Susan and Alan Boyle, authors of Spiriti delle Dolomiti (The Spirits of the Dolomites), following in the footsteps of their fellow countrywomen Amelia Edwards. Then of course there is the imposing majesty of Monte Antelao and the delightful wild landscapes of the Dolomiti Bellunesi National Park. If you missed all this, don’t worry, you can experience it all once more on Saturday 25 August at the Berti mountain hut (Vallon Popera), where management team Bruno Martini and Rita Zandonella will be ready to welcome you, together with chef Alessandro Gilmozzi of the El Molin restaurant in Cavalese and the chance to sample all the top quality products of the UNESCO Dolomites. 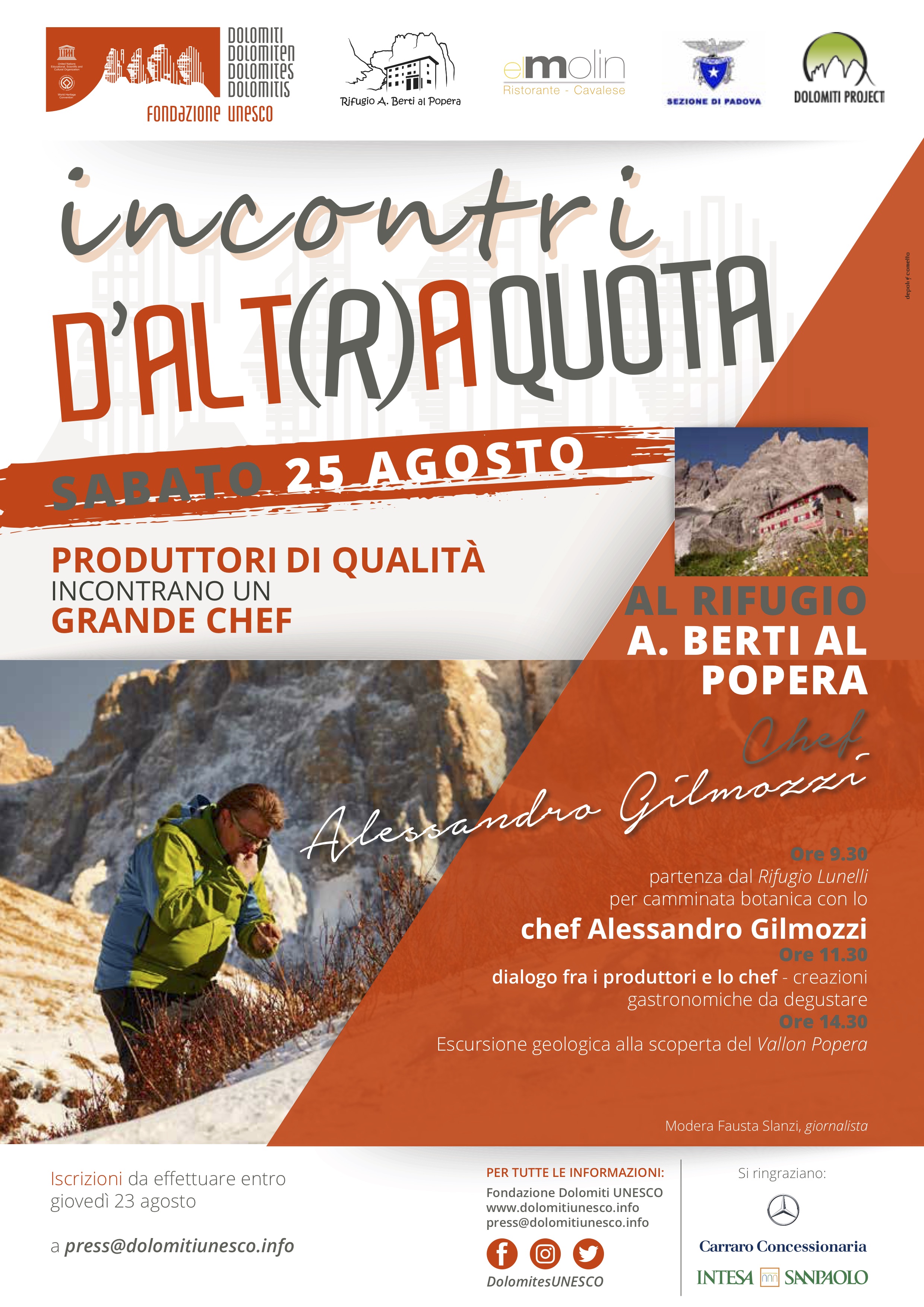 Reliving the spirit of the Dolomites at the Galassi mountain hut

The meeting took place on Sunday 1 July at Galassi mountain hut, below the mountain pass Forcella Piccola (mount Antelao), starring Susan and Alan Boyle, the British brother and sister team who retraced the steps of their fellow countrywomen Amelia Edwards, famous author of the 1873 book Untrodden Peaks and Unfrequented Valleys. Now their own marvellous book entitled Spiriti delle Dolomiti (Spirits of the Dolomites) has been published thanks to the support of the Fondazione Giovanni Angelini of Belluno. “It is often those who come from far away who are most able to appreciate our mountains. As well as delighting in the landscape, this book also values the people living among the Dolomites”, commented Ester Cason Angelini during the book presentation coordinated by the journalist Fausta Slanzi.

The perfect incarnation of that spirit of the Dolomites, of those who love the mountains so dearly that they dedicate all their spare time to them, can be seen in the volunteers of the Mestre CAI who work to keep the Galassi mountain hut open during the summer months. Indeed, ever since 1970, they have been doing an amazing job managing it themselves, as the President of the Mestre CAI Francesco Abbruscato reminds us. Whether such people are found on the pages of a book or working away in the kitchen of a mountain refuge, they all share the same culture, the culture of the mountains.

Three days later, another gradient of a thousand metres and other amazing surprises. First and foremost the travelling lesson given by chef Alessandro Gilmozzi on the possible uses of the herbs found growing along the footpath leading from the Croce d’Aune Pass to the Dal Piaz mountain hut, on the Vette Feltrine peaks.

“What drives me on is that I love working with the products of Dolomites and transforming them into emotional experiences”, said chef Gilmozzi, whose cooking with its focus on sustainability, also aims to make use of the whole of the product without throwing any of it away.

Speakers at the meeting at the refuge, coordinated by journalist Fausta Slanzi, included Marcella Morandini, Director of the UNESCO Dolomites Foundation, Antonio Andrich, Director of the Dolomiti Bellunesi National Park, Lieutenant Colonel Marina Berto, Commandant of the parkland Carabinieri unit, the manager Erika De Bortoli and, on behalf of the UNESCO Dolomites producers’ network, a representative of the farming business Canop of Rivamonte Agordino.

However it was the cuisine of the refuge and the cooking show counter that produced the most vivid representation of this initiative. For those attending the meeting, Alessandro Gilmozzi presented some very special dishes, all made from ingredients supplied by producers certified by the Dolomiti Bellunesi National Park and members of the UNESCO Dolomites quality network. One example was the refreshing dish based on such apparently simple ingredients as beans, in this case the red bala rossa bean, to which were added star anise, puffed wheat and a yoghurt foam. This was followed by a salad of beans with barley and a mature cheese flavoured with Barancino liqueur. Finally there were dishes such as tartare of Grigio Alpina (local cattle) with lovage and candied beans.

“It is not our intention to offer luxury gourmet cuisine in the refuges but rather to ensure that our menus feature high quality local dishes that are completely environmentally friendly. We know that without agriculture we would attract no visitors and we are attempting to make the networks belonging to the UNESCO World Heritage Site work in partnership with the mountain refuges, the natural parklands, the high-quality producers and the chefs with a belief in our territory”, stated Director of the UNESCO Dolomites Foundation Marcella Morandini.

“The involvement of local firms was one of the reasons we were so enthusiastic about this initiative” added Erika De Bortoli, “we also rear Grigia Alpina cattle and produce Lamon beans and blueberries. Getting to know Alessandro Gilmozzi has been a new and exciting experience and we have learnt much from a man who is both a great chef and a great personality”.