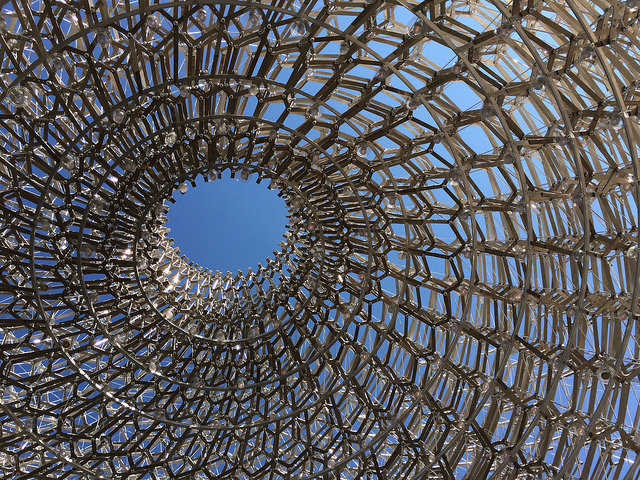 On 13 October the Foundation took part in the conference “Vivibilità della montagna: necessità di azioni condivise per la tutela di interessi comuni” (Livability in the mountains, the need for shared action to safeguard common interests) organised by the Region of Piedmont in the auditorium of the Palazzo Italia, as part of the programme of inter-regional events taking place in the Italia Pavilion, in partnership with the Conference of Italian Regions and Autonomous Regions.

Over the course of day (click here for the detailed conference programme), attended by some 200 people, there were presentations of two initiatives directly linked to the UNESCO Dolomites, the digital platform NING and the WNHM (World Natural Heritage Management) course.

During the conference session dealing with social innovation, and thanks to the partnership with the Veneto Region, the General Secretary of the Foundation Marcella Morandini presented the NING platform. This virtual space is reserved for recognised supporters of the Foundation with the aim of encouraging dialogue on topics relating to the management and conservation of the World Heritage Site.

As the General Secretary explained, “The NING platform, which is proving ever more popular with our supporters, has been designed to provide a place for the exchange of ideas and constructive debate, including on the results of the local participatory process #Dolomites2040”.

In the conference session devoted to education and training, Professor Ugo Morelli presented the training course on World Natural Heritage Management, now in its fourth year, organised by the Autonomous Province of Trento through the UNESCO area at the STEP (Land Management) department of the Trentino School of Management.

Participation in the conference “Vivibilità della montagna” marked the end of the UNESCO Dolomites Foundation adventure at EXPO 2015 at which, during the six months of the international exhibition, it staged a number of events telling the world all about the Dolomites, including showings of the documentary “Dolomiti. Montagne, Uomini, Storie” (The Dolomites. Mountains, People and their Stories) by Piero Badaloni, stands presenting the Dolomite trails shown on Google Maps (“Dolomiti Google Special Collects”), participation in conferences – “Vivibilità della montagna”, and “Nutrire la montagna perché la montagna ci nutra” (Feed the mountain because the mountain feeds us) as well as the exhibitions “Beyond Food Sustainability” and “Pastori dell’alpe. 100 storie, 100 volti per nutrire il Pianeta” (Shepherds of the Alps. 100 stories. 100 ways of feeding the planet) organised respectively by the Venice UNESCO Regional Office and the Autonomous Province of Trento.

The UNESCO Dolomites Foundation would like to thank all the organisations and partners who have helped make it possible for the Dolomites World Heritage Site to feature at EXPO 2015.