News | Learning from those who live and breathe the mountains 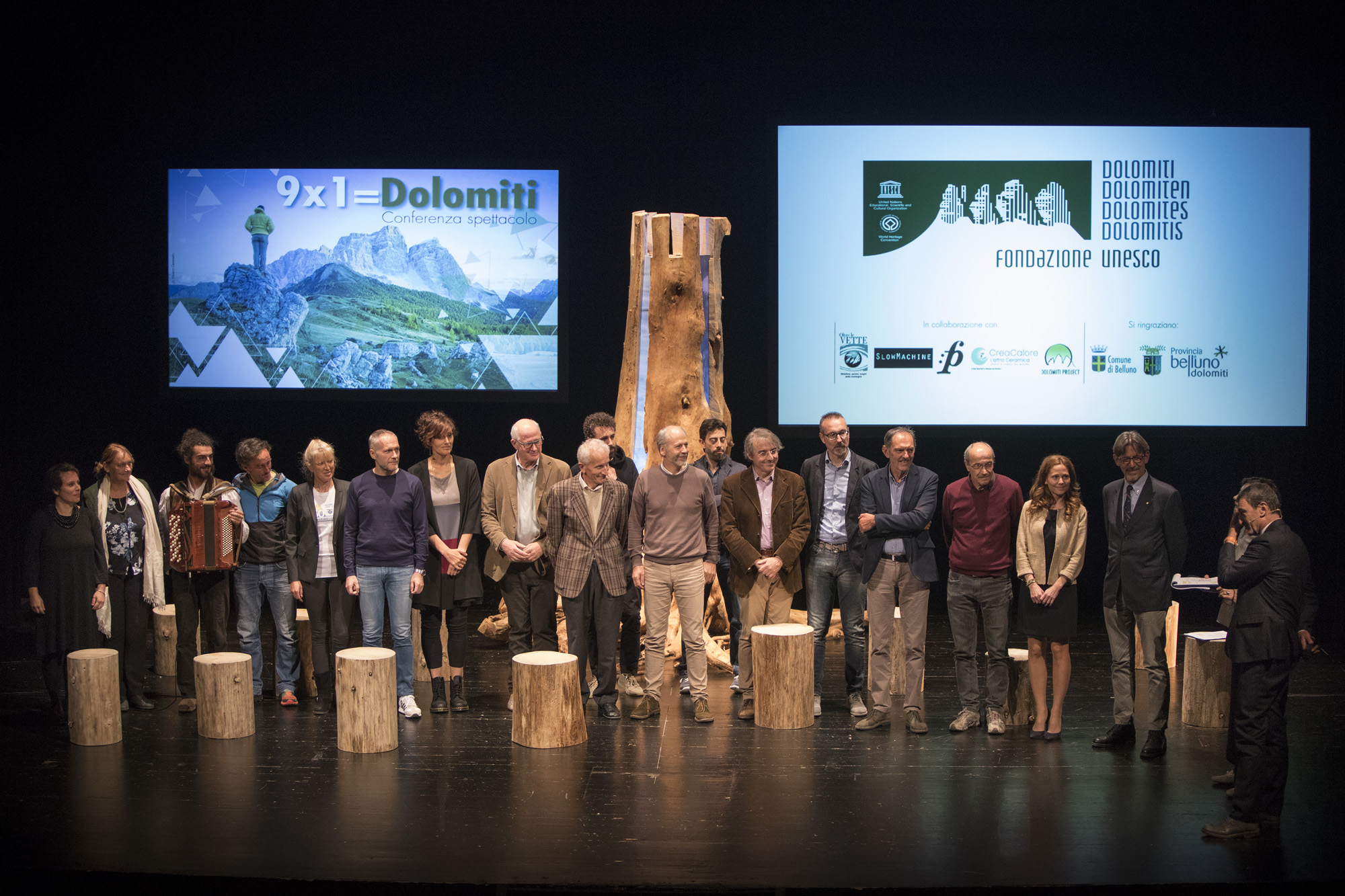 On 11 October 2018, during the festival “Oltre le Vette” organised by the Municipality of Belluno, the UNESCO Dolomites Foundation sponsored a conference-show which saw artists, businessmen, scientists, climbers, rescue workers and mountain hut managers take to the stage. All those who live and breathe the mountains on a daily basis. 9×1=Dolomiti UNESCO is a project whose aim is to communicate the importance of the single identity of the World Heritage Site throughout its five provinces: nine systems, one Property.

AN EVENING TO REMEMBER

When the lights went out on the stage of the Teatro Comunale in Belluno and the many spectators, who had not moved a muscle up to the final notes of Paolo Forte’s accordion, began to make their way out of the theatre, there was a general feeling that something important had just happened. That the geological, anthropological, sociological, economic and artistic vocabulary had merged into a single language which, while still in the early stages, was nonetheless understandable. At least this was the case of the message which emerged loud and clear from the evening: the value of UNESCO recognition for the Dolomites is directly proportional to the value we give to living there.

After a few words of welcome from the deputy mayor of Belluno, Lucia Olivotto, the artistic director of “Oltre Le Vette”, Flavio Faoro, Giuseppe Pat, president of Dolomitibus (whose new bus dedicated to the UNESCO Dolomites was parked outside the theatre) and the director of the UNESCO Dolomites Foundation, Marcella Morandini, it was over to the geologist Piero Gianolla, the architect Cesare Micheletti, the botanist Cesare Lasen and the director of the Dolomiti Bellunesi National Park, Antonio Andrich who all discussed the environmental significance of the Property.

After these environmental and scientific contributions, the focus shifted to social issues, with sociologist Diego Cason providing facts and figures on the depopulation of the Belluno mountains, emphasizing the need for a policy different from that adopted in cities. Next followed firsthand experiences of people who work in the Dolomites, like Claudia Scarzanella, a businesswoman in the wood sector, beekeeper Andrea Lorusso and hotelier Walter De Cassan, with each account placed in its historical and anthropological context by Daniela Perco.

One of the most fiercely debated issues of the moment, after a summer plagued by episodes of uncivilized and foolish behaviour, was next on the agenda: the mountains and their relationship with climbers and walkers, with the president of CAI Agordo Anna Magro, the Alpine guide and member of the Alpine Rescue service Michele Zandegiacomo and director Giovanni Carraro all making important points. The evening concluded with contributions from artists: the photographer Moreno Geremetta, the painter Silvia de Bastiani and writer Matteo Melchiorre.

The evening, which was hosted by journalists Fausta Slanzi and Andrea Cecchella and directed by Rajeev Badhan and Elena Strada, was also a physical representation of the aim of the UNESCO Dolomites Foundation: “A platform where we can establish the policies for the joint management of the Dolomites Property” was how the director Marcella Morandini defined it. These policies must focus on the active conservation of the territory, and this can only be achieved by means of networks (like, for example, the network of mountain hut managers and producers) and by adopting a “people-centred” approach to the Overall Management Strategy of the Property and, at least for one evening, to the stage.