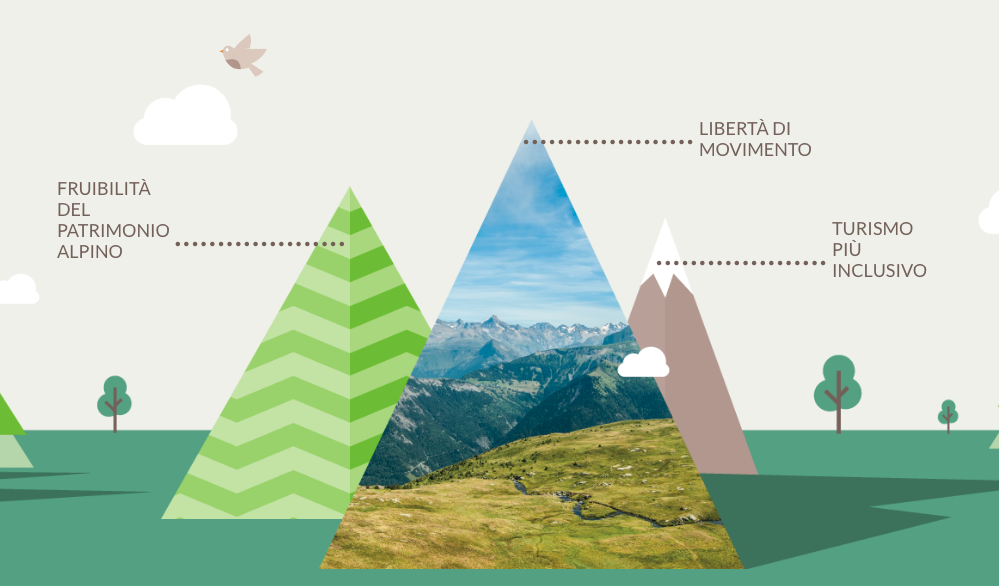 It may seem odd to discuss accessibility, just when the mountains are out of bounds. The Interreg GATE project, led by the UNESCO Dolomites Foundation, has been making significant progress in recent weeks.

A scheme that also includes Salzburg

The project involves the UNESCO Dolomites Foundation (lead partner), the Independent L. social cooperative (Merano, South Tyrol), the Municipality of Santorso (Vicenza), CAI Alpago, the University of Innsbruck and Salzburg Research. Working together over recent years, we have been able to promote the values of inclusive tourism. Pilot projects have already been launched at the Bletterbach GEOPARC (Aldino, South Tyrol), at the Parco Rossi of Santorso (Vicenza), in Alpago (Belluno) and now also in the Land of Salzburg. Salzburgerland Tourismus and Salzburg Research have recently introduced 35 easy hikes (Kinderleicht Wandern) in the district of Pongau. They are all covered by a guide, which indicates the layout of the paths, describes the surrounding landscape, and shows the position of the many mountain huts that offer services along the way. Thanks to the GATE project, this guide is now available online in the form of a digital map, which can also be accessed on mobile phones. In addition, Salzburg Research is testing ways in which families can share their experiences with others, in the form of images and impressions.

Accessibility in the plural

For contributors to the GATE project, “accessibility” is regarded as a plural noun. There are many types of accessibility; even just from a physical standpoint, it should not only concern people with disabilities, but also the elderly and families with children, as has been demonstrated by the Salzburg project. To get an idea of the various forms of accessibility, visit: gateproject.dolomitiunesco.info The Bletterbach GEOPARC, in one of the nine systems of the Dolomites World Heritage Site, has launched a range of initiatives: creating a multimedia adventure path for all visitors, setting up a barrier-free museum area with virtual reality features, and providing special parking spaces for visitors with disabilities. The Municipality of Santorso has equipped the Parco Rossi with an integrated, multi-sensory communication system, a tactile map, and a multi-media interactive auto-guide. An interactive reality game is also in the pipeline. The Alpago CAI has focused on developing the “Sentiero della sensibilità” (“Trail of Perceptions”) for discovering the mountainous amphitheatre above the Alpago valley. The trail, which is around 25 kilometres long, maintains an average altitude of 1000 metres and stretches from North-West to South-East, at the foot of the Col Nudo-Cavallo mountain group, which forms the crown of the Alpago territory. This is the starting point for the CAI alpine trails allowing access to the highest peaks which, although not as high as their Dolomite sisters, are equally as challenging.

An asset for everyone

The GATE project is still continuing its research programme. Starting from the premise that inclusive tourism is for everyone, the PMI & Turismo team led by Prof. Mike Peters of the University of Innsbruck is currently working with the Austrian Association for Civil Invalids of Tyrol (Österreichischer Zivilinvalidenverband Tirol – ÖZIV). Over the last few weeks, they have been looking into the travelling habits of people with disabilities, with special focus groups for those with motor, learning, hearing and visual impairments. Some interesting ideas have emerged for developing targeted forms of inclusive tourism, and not solely in the area covered by the GATE project.