The ocean deepens and the land begins to lift

Some 145-65 million years ago – the Cretaceous era

The sea maintained a medium depth, apart from in the south-eastern portion of what are today’s Dolomites, where the Friuli platform stood out as a massive fertile island teeming with life. The Tethys Ocean started to shrink, crushed between Africa and Eurasia. The Dolomites witnessed the first arrivals of sediment originating from what would become the Alps that, far away, had managed to lift themselves free of the waters of the Cretaceous Seaway. 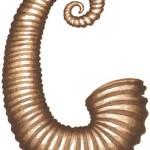 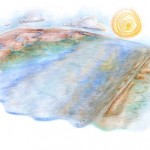 The sea was still dominant at this time, retaining its depth. The sediments that filled up this sea were mainly produced by the sea itself, in the form of the planktons that inhabited it and, when they died, sunk to the bottom to form muddy sediment of biological origin. More material came from the Friuli platform, one of the two plateaux formed during the Jurassic era. At some stage, part of this sea began to fill up with material eroded from other, more distant lands that had emerged from the sea. This was the first sign of the Alpine chain raising itself out of the depths of the marine abyss, and these predecessors of our modern Alps emerged in areas that correspond to what are today Switzerland and Austria. These were the initial effects of the collision between Africa and Europe. Towards the end of the Cretaceous era, some 65 million years ago, there was another major mass extinction, the Cretaceous-Paleogene event, that affected the Dolomite region and which saw the dinosaurs and ammonites vanish forever from the face of the earth. 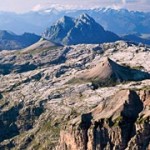 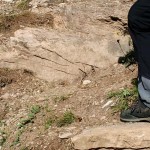