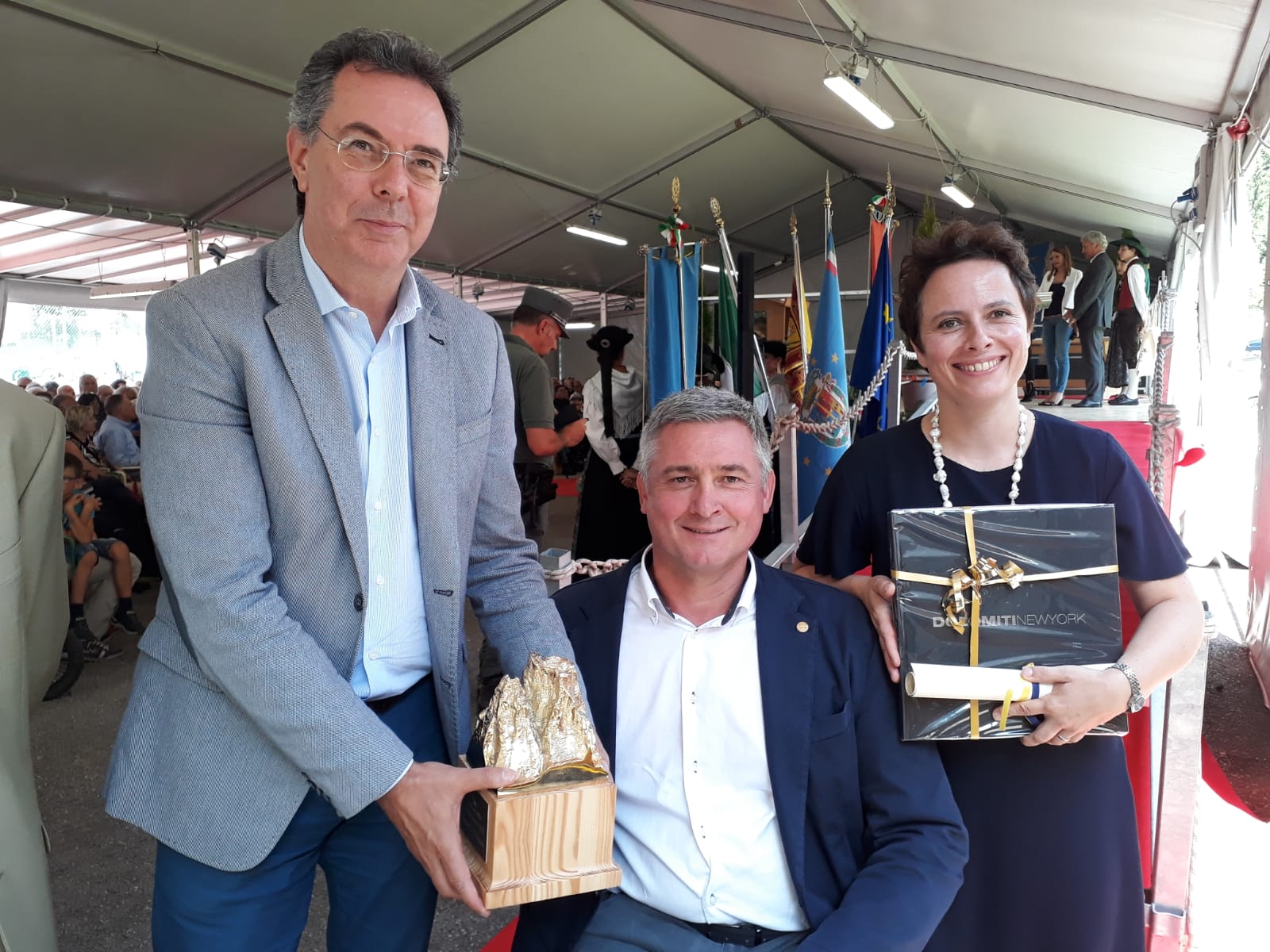 The Pelmo d’Oro award ceremony was held on Saturday 28 July in Rocca Pietore, sponsored by the Province of Belluno in collaboration with the UNESCO Dolomites Foundation: this location, at the foot of the Marmolada, was specially chosen to mark the centenary of the end of the Great War. For the second year running, the Foundation gave a special award to pay tribute to those who have become “ambassadors” of the values which determined the Dolomites’ inscription as a World Heritage Site. The decision was not a hard one this year, with the award going to Oscar De Pellegrin, Paralympic archery champion and protagonist of countless initiatives in the world of sports and disability.

The prize was accompanied by the following motivation, given by the Jury after consulting the UNESCO Dolomites Foundation:

Most people who are victims of invalidating accidents consider their “meeting with destiny” a declaration of war. For Oscar, on the other hand, it was the beginning of a new life, a life he built for himself with extraordinary determination and which he has dedicated to others and a passion for sport which he never imagined he had. This passion has taken him from Sopracroda, at the foot of the Dolomites, to all four corners of the world, culminating in a sensational career in sports, first in shooting then archery, competing in six Paralympics and bringing home six medals, two golds and four bronzes. He has used his talent to help others who, like him, have had to face that “meeting with destiny”. He has always shown great enthusiasm and expertise when taking part in initiatives to promote accessibility and has become a real ambassador of the Dolomites, spreading the values upheld by UNESCO: “Since wars begin in the minds of men, it is in the minds of men that the defences of peace must be constructed” (Preamble to the Constitution of UNESCO).

The Dolomites are a heritage that belongs to everyone. Accessibility to them is therefore a priority for the UNESCO Dolomites Foundation which, in conjunction with local organisations and associations, including the association ASSI chaired by Oscar De Pellegrin, and thanks to funding from the Italian Ministry of Cultural Heritage (MiBAC) as implementation of Law No. 77/2006, has lent its support to a project for all those with limited motor possibilities: not only the disabled, but the elderly and small children too. On www.visitdolomites.com, visitors can view 23 different itineraries which are accessible to everyone and cover the nine Systems of the Dolomites recognised by UNESCO. Each itinerary contains clear indications of the level of difficulty, as well as a detailed map, the GPS coordinates and the environmental and geomorphological features of the area. A preview of the itinerary is also available using Google Street View, so users have all the information they need to decide whether the route is suitable for them.

The first phase of the project has been so successful, that further funding has been awarded by MiBAC. This will enable the team to map out new itineraries, adding additional information for users, including the facilities on offer along the routes (shelters and refreshments, recharging stations for off-road wheelchairs or electric bicycles), the nearest emergency services and contact details of those in charge of checking and maintaining the condition of the paths.

THE OTHER RECIPIENTS OF THE PELMO D’ORO 2018 AWARD

Here is a complete list of the recipients of the 2018 Pelmo d’Oro Award: Maurizio Giordani (Trentino) for mountaineering, Josep Manuel Anglada (Catalonia) for his climbing career, the author Marco Paolini (Belluno) for his works on the mountains. The Special Prize of the Province went to two cross-country skiing “legends” from Belluno: Ivo Andrich and Costantino Costantin. Solidarity was recognised again this year with the prize awarded in memory of doctor Giuliano De Marchi, which went to the operations centre of S.U.E.M. (Emergency Medical Services) in Pieve di Cadore, which has run a helicopter rescue service for thirty years. It was a poignant moment when Monica Campo Bagatin was awarded a special mention for her hospitality. The much-loved and popular manager of the Bosconero mountain hut in Val di Zoldo passed away just a couple of weeks ago. The other special mention went to Ugo Pompanin, pioneer of sustainable tourism at the Lagazuoi mountain hut which he built and ran for 35 years.